Just over a week ago, the National Employers made an offer of 2% on all pay rates and continual professional development payments with effect from 1 July 2022. The timing of this offer is standard practice and has happened in the same way for many years.

Last year the offer was 1.5%, the previous year was 2% and the year before that was also 2%, so this year’s offer was not a surprise to us, as the fire and rescue service usually falls in with the general pay increase offered to the wider public sector.

In past years, the FBU initially reject the offer only to later accept the offer around October time and the increase is backdated to 01 July. It’s a pantomime that we have become accustomed to.

We refuse to be drawn into a conversation which oversimplifies the reasons why employees in the fire sector are in this position. It is our intention to tell your story loud and clear of how over the last 15 years there have been numerous missed opportunities for improvement in your terms and conditions. This needs to be a time of change and time to call out those that have contributed to the failings of our national pay negotiation mechanisms.

The FRSA fully recognises the current strain faced by employees within the Fire sector and in other sectors across the UK and we are fully committed to efforts to improve the financial position of our membership.

While we wholeheartedly concur with the view that a 2% pay rise now in the current financial climate does not go anywhere near overcoming what our members are experiencing in a cost-of-living crisis, we need to look at the bigger picture as to why firefighter pay overall hasn’t kept up with the cost of living, not just in 2022 but for the last 15 years.

The National Joint Council (NJC) comprises of the National Employers and the FBU and it is this non-statutory body which formulates national pay scales and annual increases. If we agree that firefighter pay is not at a level appropriate to be an attractive career proposition, or to keep a firefighter from leaving and pursuing alternative options, then that accountability lays at the foot of the NJC. Historically, the FRSA has maintained that the NJC is not fit for purpose and our view is, unfortunately being confirmed as firefighters are feeling the effects of inflation not seen for decades.

The FRSA has continually argued for reform in the fire service and with that reform comes a justified business case for a significant uplift in the pay structure. Such reform and pay increase was presented to firefighters in Scotland back in 2019 which would have provided firefighters with a pay increase of 14.74% that would have been in effect from this month. However, this offer was rejected primarily based on the advice given by another union to its membership when consulted upon. We question whether in retrospect, such a decision would be made again?

The FRSA’s position is clear and has been for several years which is publicly available on our website. The UK Fire Service needs reform, that reform will trigger a significant increase in firefighters pay and will aid the ability to retain and recruit individuals who will be the inspirational managers and leaders of the future. This action needed to happen years ago and the fact that it hasn’t is primarily down to the NJC and the organisations within it and has created a greater divide in current pay compared with inflation.

Locally, the FRSA has negotiated alternative pay models outside of the Grey Book to good effect but this needs to happen on the national stage which is why reform of the NJC cannot happen soon enough and why we welcome this recommendation within the draft white paper.

The salary of a wholetime firefighter, while in some parts of the country remains competitive, in large parts, it has fallen below that which was once looked upon as a ‘good’ overall financial package (including a final salary pension). Recruitment and retention issues are starting to show themselves.

When looking specifically at the pay of On-Call firefighters, this section of the workforce has had to sustain an actual pay reduction due to a fall in call levels of 30-40% (over the last 10 years) combined with a pay structure that focuses on activity levels. A percentage pay increase will not overcome this shortfall, it needs radical reform to take into account the drop in calls and incentivise/reward availability as well as activity. Our long-standing view is that elements of On-Call earnings need to be tax-free, something we will again raise with the fire minister when we meet later this month. More importantly we need to have a significant pay rise to combat the issues recruitment and retention the On-Call duty system faces. This is a major problem for many fire and rescue services, and a properly constituted negotiating body would have reviewed this situation and ensured that renumeration of On-Call firefighters addresses these longstanding issues of recruitment and retention. We believe that this is also a matter of social justice, where firefighters are required to commit significant amounts of time and social disruption for paltry reward. It also cannot be economic for the employers to bear the costs of continual recruitment and training because retention levels are so poor.

The fire and rescue service’s response during the pandemic demonstrated the willingness and capabilities of what can be achieved by broadening the role of a firefighter (despite the Tripartite Agreements rather than because of them) and much of this was due to local agreements between local fire and rescue services and the FRSA. It is therefore pleasing to see such recommendations in the draft white paper.

There are talks of strike-action and national unrest. History will testify whether this has or hasn’t been successful in the past. However, unlike some unions, we are not a political organisation. We are a member-led, independent organisation that chooses to use the power of argument rather than the argument of power, and therefore we will continue to argue for fire and rescue service reform accompanied by a new pay structure fit for the 21st century. We believe this approach will be far more successful than the alternative.

If you share our view and are not currently a member, please consider joining us to make your voice heard. You can join or request a station visit via our website.

We are now on WhatsApp!

In an ongoing effort to make it as easy as possible to contact FRSA HQ we now have our own WhatsApp account. You can contact us via the QR code, just scan the code to add us to your contacts. 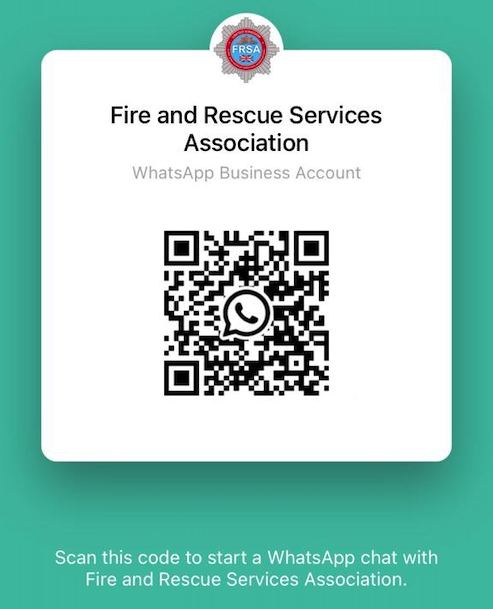 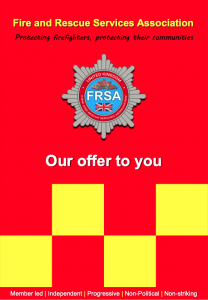