We understand that progress regarding the piece of work being undertaken by the National Joint Council (NJC) to negotiate the broadening of the role and a connected pay offer has been put on hold.

The official reason for this delay is to await the outcome of the Spending Review due to take place in the autumn.

This is extremely frustrating for thousands of frontline firefighters as this matter has been ongoing for a number of years. Members will recall the EMR trials that took place during 2016 and into 2017 before the FBU withdrew from the process. As a result a 101-page report was produced in January 2017 encapsulating the benefits of broadening the role of a firefighter. That was over two-and-a-half years ago!!! In the meantime the fire service has lost dozens if not hundreds of firefighters who have chosen to leave the service due to frustration at the lack of progress and innovation, not to mention a meaningful pay award.

We anticipate a flat uplift being offered by the national employers of around 2% to be backdated to 01 July 2019. This being the standard pay offer for the public sector as a whole.

Meanwhile in Hereford and Worcester…

Firefighters on the 50 and 40 hour contracts will attract an additional 5% over and above that laid out in the NJC circular 1st July 2018.

The agreement demonstrates what can be achieved at a local level if the two sides have a common goal and seek to reward availability which is becoming more and more of a premium in a modern society.

In contrast to the situation south of the boarder, a national pay offer has been submitted in Scotland and funding agreed and waiting to be spent. However, the FBU have repeatedly put barriers in the way for progress to be made. This raises the question as to whether the FBU are genuinely up for modernisation or not. We know that a large proportion of firefighters in Scotland would welcome the deal that is on offer which would safeguard jobs, broaden the role (and in turn improve the sustainability of stations in rural areas) and significantly increase pay over the next five years.

Our view is that if you agree and you are currently not a member of the FRSA, it is time to join and make your voice heard.

We find that current members are always interested to hear about the case work we undertake within the FRSA, which also acts as a good advertisement for potential members to see how valuable membership can be.
We’ve selected eight of the more interesting cases we’ve dealt with over the last 12 months, while we and some of our members would like to have their details included in these real cases, we believe it would be inappropriate to name individuals or services.
However, we can guarantee that these cases are 100% genuine and are not unique to the work we undertake on behalf of our members 365 days a year. 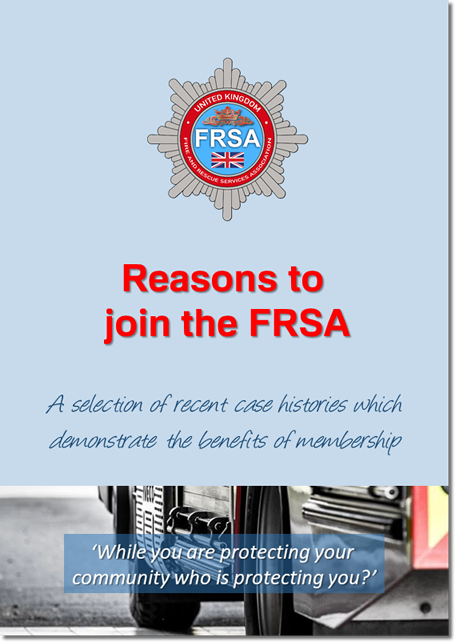